Ladies and Gentlmen, let me introduce to you one of my favorite singers of all time... 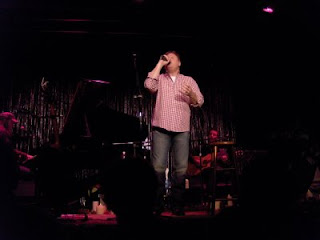 Collin Raye!! From the second row!!!

Geoff took me to see Collin Raye at the Desert Star Theatre. It was amazing! I'm trying really hard to get past my speechlessness and find some words to describe this night for me, but I wanted to get some of it out while it is still so fresh. The first person I saw was a dear friend who just happens to work there! Bonus! I tried to describe the experience to her afterwards and could barely speak! We're in the 'Moms of kids with disabilities' club... we don't need mere words! ;) 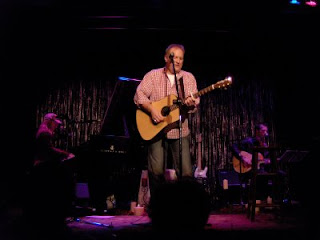 If you've heard Collin Raye's songs you know he has a huge heart. Songs like "Love Me" and "I Think About You" (both of which he sang tonight!) have big meaning and a lot of emotion behind them. He also has fun songs like "That's My Story" and "That Kinda Girl" (he also sang those!) that aren't as heavy. He sang a cover song of the Beatles song "Here Comes the Sun (Little Darlin')" (I thought of you, Dad! ;) ) and the one written by Charlie Chaplin "Smile." He also sang "I Can Still Feel You" and I probably forgot a whole lot more! :) 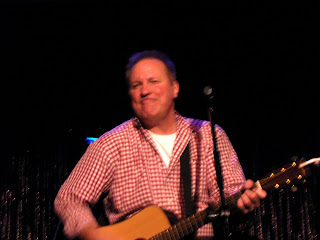 Speaking of smiles, this guy has such an infectious smile!! I mean he's all teeth and happiness just radiates out of him! The man sitting next to us said he'd heard he's coming out with a Christian album, which doesn't surprise me at all. His faith in God comes out in so many of his songs. Faith, God and Country (as in the U.S.A. ;) ) are what so many country artists are all about. One of his songs was all about how Heavenly Father answers our prayers with what we need, not what we want... it's called "What I Need." :) iTunes has already been raided for that one!

There were a couple of songs that I didn't know that were from an album he called a 'collector's item.' Apparently, he was with Sony when he made it, but they disagreed about a lot of things and he was leaving Sony and was going to market the record through someone else. Well, Sony put it out anyway which means he didn't promote it since he wasn't with them anymore and he couldn't put it out the way he wanted to with is new company and Sony only put out a few of them. It had some really cool songs that I hadn't heard, so I think I may be surfing iTunes for those, too! ;) 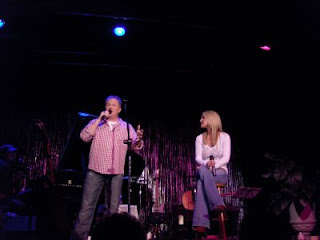 A long time ago, in the early 90s, is probably when I fell in love with Collin Raye's music and when he was pretty much at a high point in his career. He did a video for his song "I Think About You" that was used by abused women organizations and things to earn money and stuff. In it, he talks about how when he sees women in crisis, etc. that he thinks about his little girl. At the time, his daughter was in the video with him when she was 8 years old... she was there tonight and sang a couple of songs with him... very cool! She's beautiful and has a very pretty voice.

If you've talked to me and let me ramble on about this famous man I've never met, you've heard me tell you that he has a granddaughter with disabilities. Tonight he said she has an undiagnosed neurologic disorder that basically took her away from them slowly. She was developing normally and then she just slowly started losing abilities, etc. She is 8 (I know, huh?!) and doesn't speak and uses a wheelchair, etc. He sang a song that he wrote for her and I of course cried all the way through it! I think it's called "She's With Me" and it will be on his new album. It starts off talking about how it is to take her in public and have people stare and he says "she's with me" and includes her in things anyway. He talks about how happy he is when "she's with me" and it ends with her being there to usher him through the gates of Heaven because "he's with me." My mother's heart sang right along with him and it was neat to hear words put to so many of the same emotions I feel. 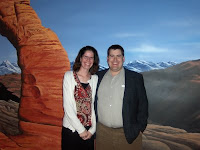 It was an incredible night for me! This kind of music has always "spoken" to me and it was pretty amazing to be sitting only a few feet away and singing along and clapping and cheering. What an awesome 10th Anniversary present, Hubby! Thank you so, so much! I know, a thank you in a blog post... what could be better? I hope you know how much this meant to me and it was even better to be able to share it with you!
Posted by Diana at 10:31 PM

Nice picture of you all dressed up. :) Glad you had a good time.

Hurray for you! That is so exciting! Hey...I got a wedding invitation from Lucie today. She looks beautiful! i'm so happy for her!

Cute family. Thanks for the ideas on the momma blog. I enjoy hearing what others do. Keep them coming.

Oh Diana! What a fun present! I would sing my heart out with someone i adored too...(Josh Groban!) I miss you! i'll try and post on your inbox on facebook- like you did if i can figure it out! I'm just getting started on facebook, but here's my blog.

Congratulations on #10! We will get there next year ourselves, but it really doesn't seem like that long since we both were getting married. LOL! That is awesome about the concert. I'm glad you had such a good time. Love ya!

That is so awesome! Congratualtions! Derek and I are trying to figure out what we are going to do for our 10th next year.