Last night I submitted a book to Covenant

Geoff was actually the one that clicked "send" after checking off all of the figurative check boxes for submitting a book to Covenant Publishing. I have had so many ups and downs with this project. That's an understatement. Before I tell you about the publishing thing, I need to tell you about the finishing thing.

One evening not very long ago, I was planning to sit down and write after tucking my kids into bed. I had this fun story about a fairy born without wings that I was totally enamored with and I loved working on it. Instead, I found myself pacing around the living room upstairs (the computer is downstairs) wondering what was wrong with me. My head is always exploding with ideas, descriptions of things, fun phrases and ways to say things that are unique to me. That wasn't the problem. After pacing and even hitting my knees and praying, it finally dawns on me that I'm terrified of finishing my own book. I can't come up with a good ending and I can't ever seem to feel like it's good enough because then it will be over. I'll have to stop writing about Avia and her friends solving this particular conundrum. I'll have to send it off to some faceless person behind a desk somewhere with a little plaque that says "Publisher" on it.

So, my rational self steps up to my terrified irrational self and says simply, "What's the worst that could happen?"

"So what?" Rational shrugs.

"I'm not successful if I don't get it published." Irrational says, leaning forward into Rational's face.

"Who says?" Rational puts her hands in her pockets.

Irrational thinks for a minute before responding, "Everyone! Everyone says that! I'm not a real author if I don't... you know, publish something."

"Do you enjoy working on it?" Rational's steady gaze is in high contrast to Irrational's frantic pacing and arm waving.

"Heck yes I do!" Irrational yells.

"Well, then instead of finishing it for that faceless publisher, why don't you finish it for yourself? Why don't you promise me, your more rational self, that you'll finish this one instead of playing with it forever? Why don't you figure out an ending and finish it just for me? What would be the worst thing about that?" Rational folds her arms and waits patiently, gazing steadily at Irrational.

Irrational sits back and strokes her chin thoughtfully. "Well, I can't think about anything bad about that. I mean, that would be great! I certainly don't care about what anyone else thinks when I first write something. I write what I love and what I would do in that situation and what I would like to say on the subject." Suddenly she looks up, her eyes shining. "I could do that. I could write it for me. If some publisher likes it, great, but I'll already know I love it."

And that is about the point that I walked myself downstairs and got serious about a good ending to my book. Some of those comments were, of course, said by real people. SO many people have encouraged me and rooted for me and "liked" my silly status updates on Facebook. It has been an incredibly amazing journey and I'm only a few short steps in!

So, when I hit "send" last night and sent off my very first manuscript to a publisher, I expected to feel giddy and elated and manically happy. Instead, I felt so much peace. I had promised myself I would do this and I came through. I didn't back burner myself this time. I didn't ignore or put myself off. I actually finished something, such as it is, and put it out in the world to see what happens.

I can't say that I won't be disappointed if I don't get published. But I won't be devastated. I still did something big and hard and I can keep trying. High five, Self! You did it!

(This is an early version of my main character, Avia, that Emily drew for me. I wrote this as much for my daughters as I did for myself. This was back when we were talking about how she would get herself around the forest without flying. :) ) 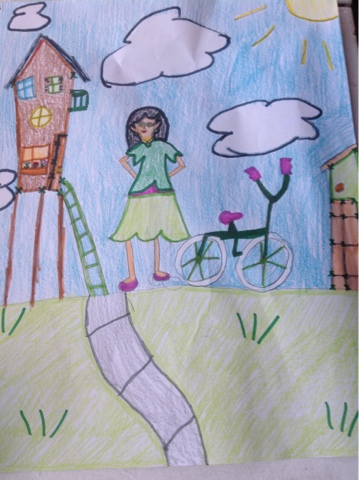