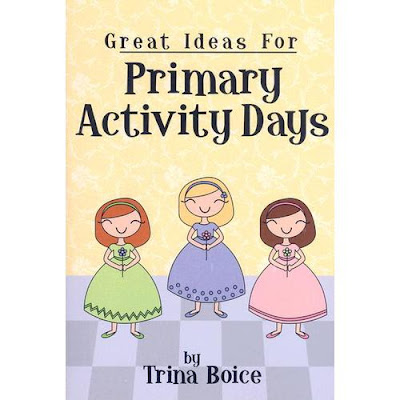 This isn't so much a book with a plot as a book with an action plan! I am the Activity Days Leader for the 10 and 11 year old girls in my Church/Ward. Activity Days actually encompasses girls from age 8 to 11 and we do fun activities that teach and uplift and foster friendships and positive peer pressure. Through a series of events, I am currently alone in my calling. Whew! Deep breaths! I think I can! I think I can!

I remember being this age and the activities that we did when we were called the Merrie Miss. So, I feel a fair amount of pressure to get it right and teach good principles while having a lot of fun. I went to Seagull Book looking for one book and came out with this one! I thought I wanted the one that has lessons, handouts and games that you just copy right out of the book and use. Instead, I was inspired by this book by Trina Boice. It is FULL of all kinds of ideas for games, craft projects and service projects, but I also love the way that she presents the ideas. I feel so encouraged reading this book! I feel like I really can be a role model for these girls. She is so positive and uplifting and, dare I say, cute in the way that she presents ideas. And not only that, but she has organized her ideas into the categories of the goals that the girls are working towards to earn their Faith in God awards.
Posted by Diana at 5:08 PM 2 comments:

There, I fixed it!

Landon has a favorite pair of sandals. They have Buzz Lightyear on them and he can put them on himself... they're my favorites, too! All they really are is flip flops with elastic around the back. When they started getting too small, we tried to replace them with actual flip flops that had Lightning McQueen on them. Let's just say that flip flops and three year olds, at least my three year old, don't really mesh very well. So, taking a cue from Buzz, I rigged up ol' Lightning with fair success. I was going to cover them with fabric and sew it with the elastic stretched and all that "fancy" stuff, but then I realized that he is 3, he doesn't care! And all I really care about is that his shoes stay on his feet. So, without further ado, here's my project in pictures. 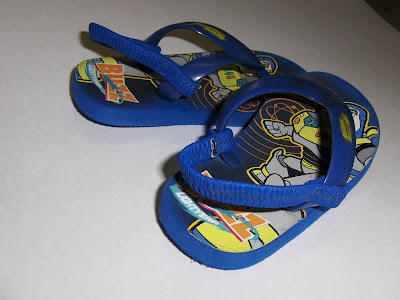 Buzz is actually in very good condition considering he wears these just about every day. I should re-phrase that... he wears these for several minutes in a row several times a day. 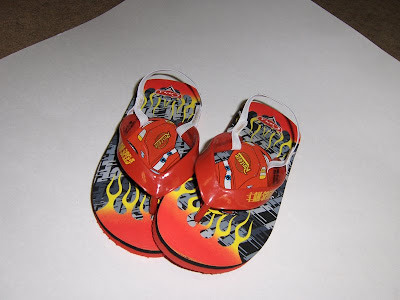 The white's a little bright, but I'm sure he can take care of that in short order. 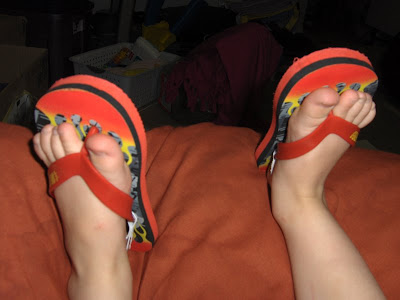 Here's his cute feet. His feet really are that blurry in real life, they're hardly ever still!

P.S. If you ever need to waste some time (who doesn't have WAY too much time?) here's a site from which I borrowed the name of this post that is very entertaining.
Posted by Diana at 9:43 AM 1 comment: