I'm having a hard time putting tonight's experience into mere words. I have to try, though, so I can always remember.
Tonight our whole family got to meet Collin Raye.
Ever since getting to see him at the Desert Star a couple of years ago, we have been in contact by email here and there.  He is always so positive and has a great perspective on life.
When it came time for him to do another stint at the Desert Star, Geoff prodded me into contacting him again and taking him up on his offer to come and see him. It's not that I didn't want to, you understand, but I am a big, fat chicken! I was too shy to actually ask. In the end, I am SO glad we did!
When we got to the theater, I don't think the guys at the ticket desk believed me when I told them that Collin Raye was expecting us. I asked for my friend Jenny that works there because I knew she'd know how to help me, but it turned out she was with her daughter at a rehearsal for a different show in a different part of the building. So, I whipped (not really, Geoff had to convince me again) out my phone and texted Collin and asked him where to go. He sent his assistant Jonathan out to rescue us. :)
When we (all 7 of us) walked into the tiny backstage area, he just reached out and hugged us. He just exudes happiness and love. His heart is bigger than his whole home state of Texas. Almost as soon as we got there, I pulled Becca out of her chair and handed her to him. 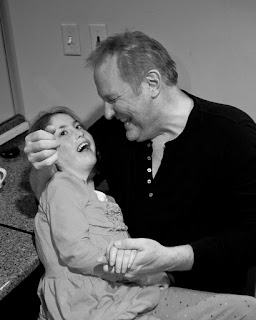 I have never seen Becca take to someone who is not family so quickly before! We'll just have to make him honorary family. ;) She was smiling and even giggled. This from my girl who has struggled with adjusting to a new room so much that she has fallen asleep most nights in tears. I was really worried that meeting someone new would be too much for her. But there she was, leaning against that gigantic heart of his, just a-grinnin'. I could tell that he loved it. I told him that I thought it would be hard to hold her after suffering the loss of his Granddaughter because so much of Becca seemed to remind him of Hayley. He just said, "I crave it." He just kept stroking her hair and giving her kisses and talking just to her. It was truly the sweetest thing. He held her until the last possible second that he needed to get ready. 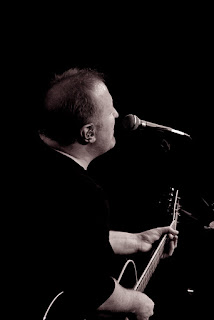 We talked about all kinds of things. He is very spiritually minded, like we are. He talked about how these children's bodies are more like protection from the world for a truly wonderful spirit. We also talked about how we need the Lord in our lives in order to know what to do and to help us through all the trials of caring for someone who can't tell you what's wrong. So much of Becca reminded him of Hayley. He messaged a picture to his daughter of he and Becca and he said it would make his daughter cry... in a good way. :) There is so much that connects about hearts like ours that have lived through loving someone who needs all your care and who you pour your heart and soul into caring for. I have thought so many times of his daughter and prayed for her to find peace. I know that will be me someday... 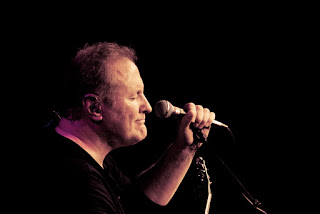 He had his trusty Jonathan find us a spot and even though we had to carry the wheelchair up some stairs, I'm so glad we were up there! We were right to the side of the stage and there was a room with some couches and a little bathroom, so we were set! I even got to text my back up drivers, my Mom and Brother, that we were doing alright and they didn't need to come and confiscate any unruly children. :D 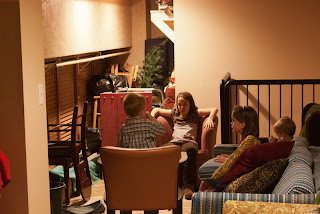 Becca didn't want to be in her chair, so she sat on Mama's lap the whole show. She didn't even fuss! Do you know how big a deal that is?! Huge! When he would stop singing and talk to the audience, she would pause and perk right up. Getting to know his voice beforehand made such a difference for her. Although she wasn't as animated as she was sitting right on his lap, she enjoyed the show, the singing and the music. 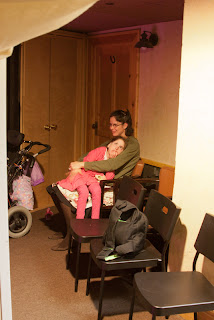 Emily and Gracie liked watching the piano player and the girl that played the bongo drums. Emily said the piano player winked at her...she loved that! (I've gotta find a way to get that girl some piano lessons!) :D Collin gave Becca and I plenty of sideways grins and winks. Such a caring guy. 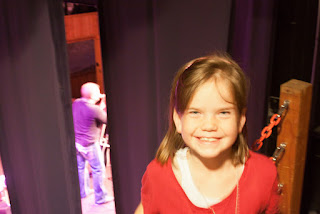 Gracie loved when he sang Amazing Grace.
Landon told me several times that he liked watching "the Rockstar." He asked when exactly he would become a grown-up when I told him that he could be a Rockstar when he grows up. :D
Ethan had fun with the pillows on the couch, tormenting his sisters and stealing the ipod away from them. Basically, he acted like the two year old he most definitely is.
When we went to leave, Collin watched us walk down the stairs as Geoff was manuevering the empty wheelchair and I was carrying Becca. I didn't know he was still there until, when I got to the bottom, I heard one last "Bye now!" He made sure we made it down safely before he really left us. And another super great thing about tonight:
Becca didn't cry at all while falling asleep tonight.
Posted by Diana at 12:18 AM 11 comments: