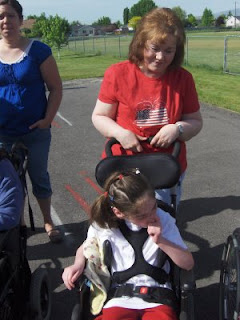 Oh my goodness! We have had such a FUN morning!! Today was Becca's school dance festival! It was so adorable and fun and cute and HOT! :D It was outside and the classes would come out one door and go in the other after their dance was done. Becca's class was very first! I came running the last few steps and whipped out the video camera and just about then the announcer goes, "Here's Barb's class doing the Star Spangled Banner, please stand and sing along!" All of a sudden the heads I was going to tape over are standing up! :D LOL Some of it is in between people, but I will try really hard to get it to a place where you can see it! :D They "walked" (i.e. were pushed in their chairs) around in a circle while the music played and then they lined up at the end and waved their flags. It was just adorable!! :D Already by then I was wishing for some shade, sunscreen or some hats or all 3! :D

I thought about video taping the other classes, because they were such a riot, but instead I put it away and just danced with Gracie and Landon. :D So, sorry there are no visuals for that part, but I have to tell you some of the cutest things! Gracie loved the Under the Sea one... they walked around dressed all ocean-y and they had flippers taped to their chairs and there were mermaids, dolphins and even a King Triton! At the end, they were all wheeled under a limbo stick with fabric strips coming down off of it and they would all grin as they came through! It was so cute! You could tell they had practiced it and that they all liked going through the "waterfall." :D They also had bubble machines going and EVERYONE loved that! :D

Gracie also loved the I Want Candy number! They were all standing in a row and dancing and singing along and they were, of course, throwing candy. The best one is the big, tall boy who would grab a handful and throw it straight up in the air and it rained down on their class! :D They threw some out to us, too... eventually. :D

The hokey pokey was one of my favorites. :D The ones that could stand, stood in a line and then for the "turn yourself around" part, the two in wheelchairs were wheeled around the ones in the line and the one girl (in a chair) was just grinning the hugest grin in all the world! It was so sweet!!

We all loved the Boot Scootin' Boogie. :D They were older, higher functioning kids and one of their teachers was out in front doing the actual Boot Scoot. One of the girls kept up really well! :D The rest of the class were doing their own thing and they were all just so funny and cute! My favorite guy was a big kid with Downs and he's just walking all over in and out around his classmates. :D The other guy is so tall and skinny and talkative and he's right out in front just jumping around! They were having SO MUCH FUN! :D

At the end, we all moved all the chairs and did the Chicken Dance together. So, there's preggo Diana holding Landon and doing the Chicken Dance with Gracie! :D It was HILARIOUS!! Betcha wish there'd been a video camera turned on to ME during that one!! :D We had SO much fun and I wish you all could have been there because it is just impossible to be unhappy in a place like that!! :D

I hope you're all having just the best day ever! I love you!!! 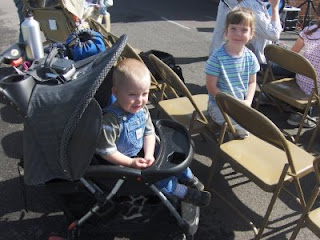 Head on over to the Kids' Blog for more pictures! Drop me an email if you need an invite. :)
Posted by Diana at 11:44 AM 3 comments: 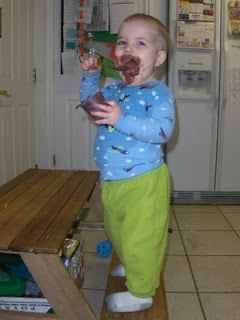 I think we have our first permanent mark on Landon's head. I figured I better document this fact so that someday he will be able to remember where each scar came from when he's bragging to some cute girl. :D So, for the record, he is a year and 10 months old, it happened in the kitchen when he fell of a chair and it is right next to the swirly cowlick on the crown of his head. I actually discovered it because he had blood on his forehead from where he had touched it and then touched his forehead. :D He cried for all of 7 seconds and then was up in his right chair with the seatbelt on to eat a snack after a nap. When I cleaned it he said "Ow." a couple of times, but that's it! It is a gash about a quarter of an inch long and split enough I could push the sides together to close it. It didn't bleed very much, but I'm fairly sure it will leave a scar. So there you have it! Our first lasting little boy injury... on record! :D

Here he is in all his fuzzy glory! ;) These were printed on glossy paper and were truly the clearest ultrasound pictures I've ever seen. :) They still look a little like finger paintings or inkblots or something, but ya gotta admit, it's pretty cool technology to see an unborn baby. All his measurements were within limits and he measured exactly with the dates we had in the first place. We would have been excited for a girl, too, but we're extra excited for Landon to get a baby brother! :D He's thrilled, by the way. I'll type out his soliloquy later where he describes his unbridled happiness at the impending birth of his baby brother. :D

Thanks for stopping by and enjoy the pictures! ;) 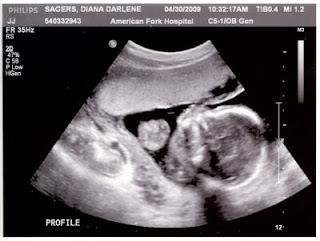 Here is his cute little head with his fist under his chin. 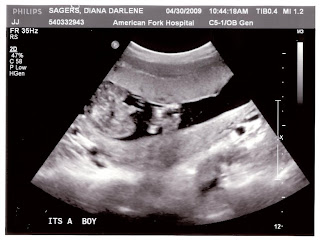 Here's his boy parts. His little bum cheeks are over there on the left. 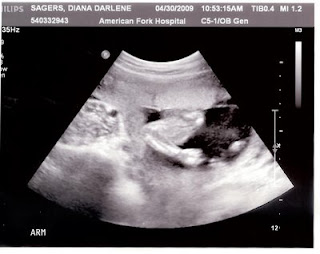 Here's his throwing arm, already flexed for action. Could be his programming arm... only time will tell! 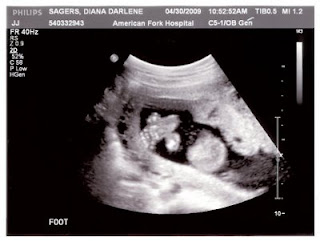 This is my personal fave as far as blurry ultrasound pictures go. It's his tiny little foot. :) You can see the tiny toes.
Posted by Diana at 10:22 PM 8 comments: