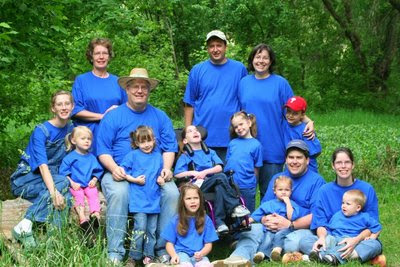 When you put the terms "camping" "pregnant" "4 kids" "wheelchair" and "rain" together you wouldn't think it would add up to tons of fun! But it did for us. :) We were definitely "Hammon such a good time!" :D Geoff bought us an incredible tent that fits us really well! Click here to see pics. :) He also bought a second air mattress that was double tall and just what the Dr. ordered for a wife 'with child.' It rained very little and we had lots and lots of yummy food and way too much sugar to snack on in between. :D I got home craving more gum drops, cinnamon bears, licorice and s'mores than ever before! :D Our camera batteries died about the time we got to the campground, but Aunt Colleen and Uncle Greg took lots of really great pictures, so go check them out over there! :D I LOVE the picture at the top of this post because Becca is SO happy!! Aunt Glenda was standing close by telling her how pretty she is and she was just grinning! :D Yay! Way to go, Darin! Great pictures!!

I love hanging out with my family and we all just blend so well together. We all loved and helped each other's kids... roasted marshmellows for each other... kept the rain off each other... played card games until the middle of the night together... took pictures of each other. Throw in some Pepperidge Farm goldfish crackers and cookies by the pound, Gossner's squeaky cheese and Aggie ice cream... put it all together and what have you got? A bunch of Super Awesome people Hammon such a good time!! :D
Posted by Diana at 10:53 PM 4 comments:

A Set of Swings

My wonderfully strong and innovative husband and his equally creative, generous and strong family built us a swing set! It's made out of 2 1/2 inch metal pipe and it fits 3 swings plus a tire swing. It's somewhere around 10 feet tall after cutting off about 2 feet off of each pole when we realized how humongous it was going to be! :D The tire swing isn't up yet, but with a small bean bag, that will make a perfect place for Becca to be and we may still make an inside out tire swing that would hold her kind of like a banana seat. For now, we jerry-rigged the baby swing into the third spot. 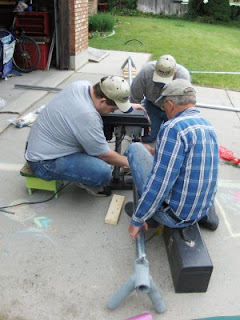 Geoff, his Dad and Josh working on the holes for the swing bolts. 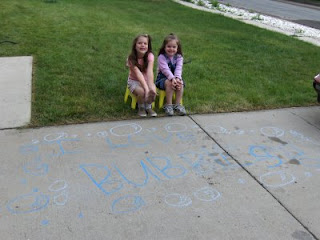 The girls drew with chalk to distract them during the wait. 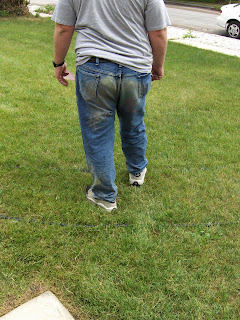 Daddy sat in the chalk while working on the swing set! :D 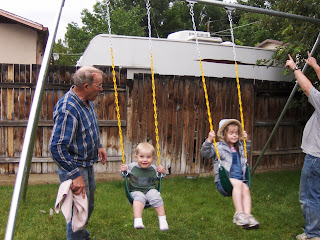 The first trial run! It rained most of the morning that we put this all up. Brudder's face says it all! :D 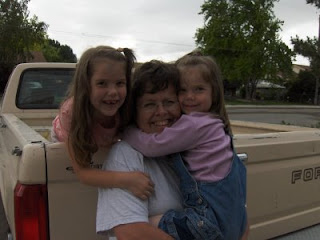 Thank You, Grandma and Grandpa for the awesome swings!!! 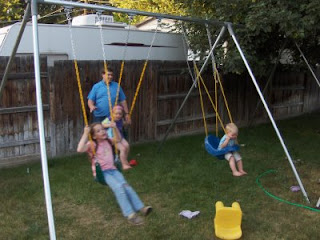 Apparently, Mama had the camera set to "blurry," but here they are in all their glory!
Posted by Diana at 10:32 PM 2 comments:

As you may or may not have noticed, I tend to have blog constipation. I wait and only write about the big stuff that happens. :D I guess you could say I have IBS... Irritable Blog Syndrome. But I so love reading other people's blogs about all the little day to day stuff, too. So, here is my offering of Ex-Lax (and my last unattractive metaphor!) and this post isn't about anything! :D

I have felt like I'm floating lately. I'm on a river, so I'm still going in some direction or another, but I don't feel like I am taking an active roll in propelling myself down the river. Pregnancy has really slowed me down, and not that it shouldn't, but my life seems to have only two speeds... really fast and really slow. The last weeks of school were insane! I ran around to 2 different schools to dance festivals and plays and delivering teacher gifts and all the while shuttling the littlest 2 in a 2-40 air conditioned van... 2-55 if I was really in a hurry! ;) And now that everybody's home I don't want to go anywhere, I don't want to do anything, I just want to sit with my feet in the kiddie pool and eat popsicles. :D

I have found, to my great surprise, that my kids can work with proper motivation and I'm not SO behind on housework as I was in previous weeks. They can be really quite charming if they are rewarded sufficiently and hopefully punished less. :D I am of course saying this after the "Bedroom Coup of the Beginning of the Week." Their room was a Disaster area with a very capital D! Clothes everywhere mingling dirty with clean, purses, necklaces, dollies, hair elastics... you name it and it was on the floor in there. And it happened much in the way a tornado does. It had been clean for what I'll call several weeks, but was really closer to a week and a half when all of a sudden the laundry bags exploded everywhere! It might have something to do with them breaking the PVC framework for the laundry sorter and the bags then slouching to the floor. After asking nicely and giving them helpful hints (why don't you pick up everything yellow first?) it wasn't getting any better, so I invaded! I kicked them outside to play and cleaned the room myself, stashing favorite books and toys and even a couple of clothing items in bags with their names on them. Since then they have had to earn back the things the invading army took by doing jobs for the general. :D Geoff and I decided that they'll do it until they get their most favorite stuff back and then they'll lose interest and then to D.I. will go the spoils of war. :D Some day it might even be their own idea to keep it clean! For now, they don't get read to at night unless everything is picked up and hopefully they'll get into a better routine.

I hate seizures! I don't even want to go into it, but I hate them so bad I can taste it in my mouth! :P Blech!!

I wish I had time to write! I've always said that if I made it a priority I could go all the way and love every minute of it. BUT I also know that if I did make it a priority, it would selfishly climb to the very top of the list and push out things like clean dishes and clean clothes and reading to my kids and walking to the park and cooking nutritious meals. And so, it sits comfortably under those things for now waiting for me to give it the time and focus it needs to really become something. Someday before I die, I hope for you to have a copy of a book on your bookshelf that I wrote and that you actually enjoyed reading. :)

So, here's to enjoying a paddleless canoe ride down a lazy river once in a while. Here's to letting things slide a little sometimes as long as I eventually get back in gear and get things done. Here's to kiddie pools and popsicles. And here's to motherhood not being perfect, but being memorable and fun and well worth the journey!
Posted by Diana at 9:30 PM 5 comments: