Faith in Every Footstep - Day 2 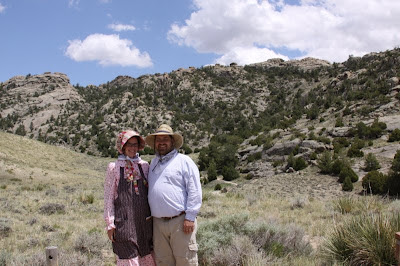 Today we drove over to Martin's Cove. The Willie Company and the Martin Company knew about each other and travelled somewhat close together, but their stories ended quite differently. The Willie Company was in Salt Lake by the time the Martin Company was finally all rescued and on their way. I knew a lot of little details from all of the personal stories that I read. It was a really neat experience to walk in the places that they walked. 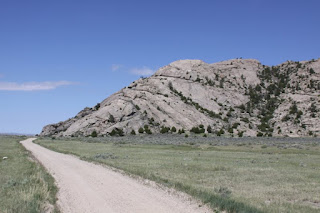 Martin's Cove is up against some rocky hills amidst miles and miles of rolling hills. I couldn't help but think that it must have been hard to be able to see so far, in a way. One of my coping skills is to take a step back and try to see the whole picture. It helps me to quantify my trials in the terms of how much of my life they actually take up. Usually it helps me to see that things are not so bad in the great scheme of things. Walking hundreds of miles to a place you've never been, it must have been so hard to take that figurative step back only to see hundreds and hundreds of more miles towards a place you only hoped had a place for you in it. We joked about having "bonnet vision" where you could only see what was right in front of you. I think I would have had to force myself to focus on taking that next step and only thinking about them one at a time. Probably not all the time! Most of the time, I'm sure they looked forward to Zion and Temple covenants and their optimism and testimonies fueled their steps for sure. 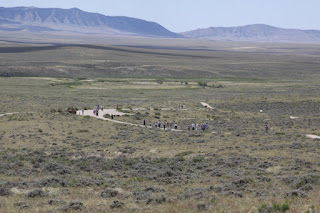 The Martin Company was in much more dire need of help by the time they were rescued. I find it interesting to note that the rescuers didn't just scoop them up and carry them off. The first rescuers to reach them were on horse back because they had left the supply wagons to hunt them down. Nobody was quite sure where they were. When they did find them, they had them give out slightly bigger rations and then they had to walk for 3 days to get to where the rescue wagons were. When they got there, the rescuers had built big fires and put up tents (which the bedraggled saints hadn't had the energy to do for days). It must have been such a welcome sight! But they still had to use their own feet (mostly frozen feet) to get there. I think Heavenly Father watches us struggle and wants to help us and so often sends help, but we still have to get ourselves out of the mess. He knows how much stronger we will be if we do it ourselves. If you have ever read any stories from any of these pioneers, you can feel how strong their testimonies were. They used their own personal refiner's fire to its greatest advantage. 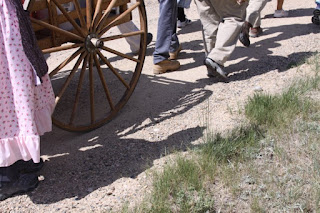 Tressa and Suzy played some beautiful prelude music as we rounded the rocky hills to find Dan Jones Cove. As we came around the corner and heard the beautiful strains from the flute played by Tressa, complimented by the harmonizing guitar, it really set the tone for our time there. When the company did reach this place, they had no room for them in the one building that was previously a trading post. They tried to shelter them in the coves created by the rocky hills there to wait out the storm. The storm was so bad that there was little relief to be found. We knelt and prayed in Dan Jones Cove, all of us together. As Brother P. voiced the prayer, I could feel the knitting of hearts happening.

We did a reverent river crossing this day. For us, the sun was shining and it felt nice to get our feet wet. When the pioneers crossed the Sweetwater river over and over, it was in freezing temperatures and snow and ice. The stories talk about the ice floating on the water and cutting their legs. My good friend Michelle B. and I were standing on the banks waiting for our turns. We talked about how at each crossing you would have to worry about if it would be over your kids' heads or not. Or how you would get them all across with the least amount of trips through the icy water. I was in tears before I even crossed.

Right before we crossed the water we sat around the statues dedicated to the (at least) 4 young men who took it upon themselves to carry everyone they could across. The statues are heart rending. One held a little boy on his hip and then when you look closer, you can see a little nose sticking out of a blanket inside his jacket where a baby lay in his other arm. Two men carry an old man with a long beard and a bandaged foot together, walking sideways. One carries a girl about the size of my daughters with her head on his chest. I'm sure they had a glimpse that day of the great deed they were doing. I hope they are still allowed the privilege to glimpse the impact those lives they saved has had to this day. There are generations of people now here that came from those people they lovingly carried when they couldn't carry themselves. 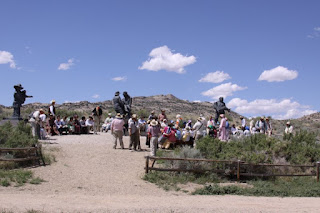 As I was crossing the river, holding on to a previously-placed guide rope and on a warm day, I tried to imagine ice floating in the water and the current pushing on my already-weakened legs. I watched as Grant walked across by himself with his arm in a sling, knowing that he would have carried many across if he could have, but he couldn't. I watched Ben carry his sister Tracy across who had earlier been riding in a rickshaw because her foot hurt from a previous injury. I watched our Pa carry our Ma across, both grinning. I watched Jake carry his Mom across with a determined look on his face - he didn't stumble once. I watched a crowd of boys that would have crossed back over and carried more of us if the missionary had let them. I watched Mitshell and Miguel watch from the bank, not being able to cross for health reasons and probably wishing they could. As we walked back to our things in bare feet, I imagined the bloody tracks that cracked and raw feet left in the snow all those years ago when their shoes finally gave out. I imagined the fear and loss they must have experienced after each and every wintry river crossing. As we left, we walked past the even smaller stream that some had to be carried across because after all they had borne, they could not stand the thought of crossing one more stretch of water. 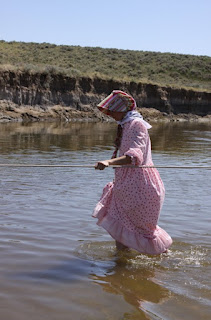 Levi Savage talked to us tonight. At the last minute they gave me Giovanna and Jordyn to add to my Spiritual committee. Jordyn walked for Levi Savage and so I asked him to give the thought as part of the devotional this night. He got up and talked about how Nephi did what he was asked to do even when it seemed impossible. Levi Savage knew how hard that trek would be for the pioneers under his care. He urged them not to go so late in the season. When they opted to go anyway, he got up again and said that since they had decided to go, he would go with them even if it meant dying with them. Several accounts mentioned this story and all of them also talked about how hard he worked alongside them. Jordyn did an amazing job relating Levi's story to Nephi's. Giovanna gave the prayer in Spanish which was so appropriate with our friends from the Spanish Branch there. She prays with such a sweet spirit that even though I don't understand the words, I can feel of her love for her Heavenly Father and she is an obvious example of how much He loves her, too.

Our kids played together every chance they got. One of the missionaries said that most groups divide off into smaller groups in the evenings to hang out. They were impressed that all of our kids played together. They had this ninja slap game and a tail snatching game. On one of the other days they even dominated Red Rover. They would play until it was dark and our Trek Mama would blow her whistle to send them off to bed. 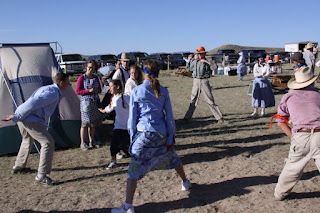 Geoff decided he was too cold on the air mattress fully inflated and so he slept on the ground. I tried to sleep on the mattress, but without him there to hold down the other side, I was pretty much on the ground, too. Luckily taking my joint stuff and Aleve and walking a ton kept me in the manageable pain zone.

Thank you so much for your testimony and your pictures. I'm having fun reading your posts about trek and thinking about what I have to look forward too.

I'm sitting here bawling right not, thinking about how much I love all these people and how strong and loving they are. Thanks for keeping me up to date.