After breakfast, we left with Grandpa and Grandma to a nearby coal strip mine. The gigantic trucks honked at us like they were doing a show. :) Grandpa explained how much bigger this seam of coal is than any other in the US. He said if Campbell County, where the mine is, was its own country; it would be the 6th largest coal producer in the world! They have taken off the top layers and moved them and when they get all the coal out, they will put he dirt back and re-plant grass. We took pictures in the giant scoop and the huge tire. Even Grandpa got inside the tire, which the kids thought was very Awesome! 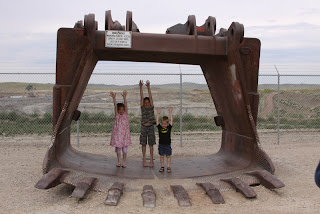 Wyoming is some mighty monotonous driving – I’m sure the Pioneers would agree.

VERY WINDY! Storm clouds were everywhere. Becca, Grandma and I stayed in a little shelter reading about the Pioneers. It started with Landon running from his sisters, but Grandpa, Dad and the rest of the kids ended up walking out further to see the preserved wagon tracks. They built a bridge over the top of them to keep them from getting ruined.

Independence Rock was so named because the Saints reached there around the 4th of July and celebrated our country’s independence there. The plaques talked about how they would write their name on the rock when they visited or passed it on their way. They used tar or grease mixed with gun powder at first. Eventually, they had professionals posted there that would chisel your name for a small fee.

Lots of the journal entries mention Devil’s Gate, too as they are in view of each other. Going West, they would often go 46 miles out of the way through Fort Bridger because there was more water and food for the livestock that way. Forty six miles is more or less three days’ travel! We clocked off about 15 miles with the girls to show how fast we can now travel the same distance they could only go in one day. 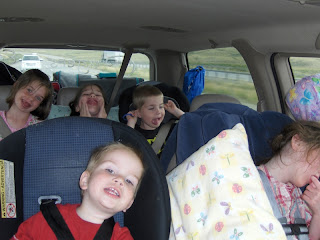 It has been really fun to travel with Grandpa and Grandma on our own. They are really patient about the Becca delays and don’t make me feel like I need to do an Indie 500 pit stop, if you know what I mean! ;) Speaking of Becca, I think her ‘horse sense’ has kicked in or something. Can she know we’re on our way home? She has been happier overall today and currently she is scream/laughing and kicking happily. :D Hallelujah! :)


What a gorgeous sunset!! I took a bunch of sunset cloud pictures. The best sunsets happen on rainy days, dontcha think? J It took forever for the sun to go down because of the flat terrain and because we are driving West. J The words on our back windshield are the right way around when you look in the rear view mirror and they make really cool shadows on the ceiling when someone passes us in the dark with their headlights. :D 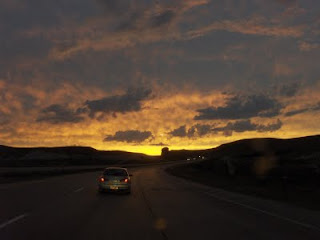 Famous last words about this trip:

Emily, age 9: I liked how well the dam actually worked in the creek. I thought it was kinda scary, but really cool how the buffalo were so close to the car. (She changed her favorite meal from hot dogs at the campground when she heard Gracie’s answer) :) My favorite was eating in the parking garage.

Gracie, age 7: I wanna remember that we had lots of fun and we got privileges and play with people we haven’t seen in a long time and just kinda talk. My favorite meal was the one we ate in the parking garage at Mt. Rushmore.

Landon, age 4 when asked what his favorite things to do were: Playing. Sleeping in a cabin.

Ethan, 22 months, what he always wanted to do: Ousside! Ousside! (Outside!)

Becca, 11: The cabin, mattress and white noise of the A/C therein were a ton better than sleeping on the ground… I even forgot to fuss some nights because I was so tired. I got to get out more this time because my chair rode on the back of the van.

Diana, 34: It wasn’t as bad as I thought it would be and I’d do it again. :D I love Dutch oven cooking, especially when Denise does it. :D Chicken and rice and the Navajo Tacos were my favorites. I love how we just stopped and visited monuments and historical places if we felt like it on the way to other places and things. The cabin was a big blessing and I wish we’d remembered to snap a picture of it!

Didja open up Geoff's blog in another tab? He has a few different pictures than I do, so be sure to check it out. He loves comments, too! ;)
Posted by Diana at 11:10 PM

Thanks for writing it all out, and for sharing it with me. It's fun to read about your adventures, and see your family in the pictures. A great Adventure!

Sounds like a fun trip. One I wish to take someday!

Family trips are great aren't they! I love your comment-not as bad as I thought. I feel the same way!